The first county-wide celebration began as an attempt by several civic leaders to boost the morale of Clallam County citizens, following the Panic of 1893. The Panic of 1893 was a nationwide depression that caused bank closures and railroad bankruptcies. In an effort to showcase the natural harbor at Port Angeles, the U.S. Navy Pacific Fleet, based in San Francisco, was invited as the city's guest. It came as quite a shock when the U.S. Pacific Fleet's commander, Rear Admiral Lester A. Beardslee, accepted the invitation. The successful invitation encouraged the leaders to invite the governor of Washington, civic leaders from Victoria, British Columbia, British Royal Navy ships, and other dignitaries. September 1895 was a busy month for county residents, as they prepared the community for the celebration. 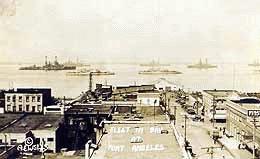 On October 2, 1895, the U.S. Cruiser Philadelphia with Captain Cotton, steamed into the harbor at Port Angeles. The U.S. Cruiser Philadelphia was at the time one of the largest cruisers of the new American Navy. The ship saluted the townfolk with cannon fire and music. The naval crews slept on shore in tents erected throughout the city. During the day, they would provide exhibitions on military drills and hold band concerts in the evenings. Naval ball teams played against local teams.

The county-wide celebration included an agricultural fair sponsored by the Clallam County Horticulture Society, held in the three-year-old Opera House, on First Street in downtown Port Angeles. The magnificently decorated auditorium, stage, and galleries were crowded with exhibits. Outside space was filled with pens and stalls full of livestock.

The celebration continued for three days. On the evening of October 4th, a Harvest Home Ball was held. This gala event was the highlight of the festivities, attended by almost everyone in town. The Pacific Fleet continued to visit the area every summer until the 1930's. The 2nd Clallam County Fair which was in 1914, was held again in the Opera House. Fairs 1915-1919 were held in the Davis and Woods Pavilion.

The Granges ran the Fair from 1931 until 1961, when the County Commissioners designated the Clallam County Fair Association to operate and maintain the annual county fair.

Horse racing at the Fairgrounds was a big draw throughout the years. The Jack Henson Memorial Derby is the feature race. In 1977, the name was changed to The Ed Hagerty Memorial Race.

In May of 1991, Clallam County assumed operations of the Fair. It is now operated by the Parks, Fair, and Facilities Department.

Historical photos courtesy of the Bert Kellogg Collection from the North Olympic Library System and the Peninsula Daily News. 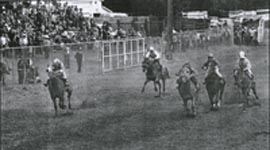