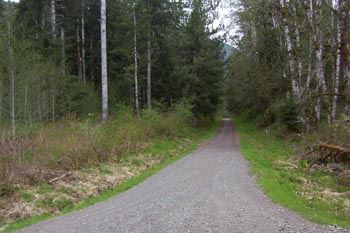 The proposed Sadie Creek Shooting Range is located approximately seven miles west of Joyce, nearly two miles south of State Highway 112, along a subsidiary road off of the Washington State Department of Natural Resources 1000 Road. The site lies at an elevation of approximately 700 feet, lying on a broad plateau area between the drainages of Sadie and Susie Creek. The legal description of the property is: the southeast corner of Section 6, T30 N,R9 WWM, together with Government Lots 19 and 34 in said section, together with the west half of the southwest corner of Section 5, T30 N, R9 WWM. The total acreage of the reconveyance is 320 acres. Of the 320 acres, approximately 80 acres will be used for the proposed shooting range and buffer. 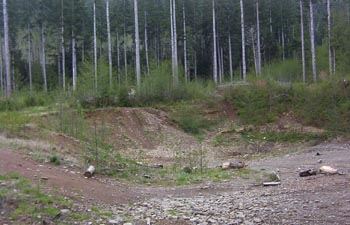 Clallam County has had a number of shooting ranges over the years. A military range, at Camp Hayden, became a recreational range during the late 1950s and 1960s and was closed due to expansion efforts at the County Park. As a result, a shooting range was established in the Airport Industrial Park during the 1980s and a private range is still active at the Sunnydell Range, which is located between Sequim and Port Angeles. The Port Angeles Gun Club has a shotgun range located on State Highway 101, across from the Deer Park Road intersection and the West End Sportsmen's Club in Forks has a firearms and archery range off State Highway 101, across from the Forks Outfitters Store.

View a List of Shooting Ranges in Washington State (PDF).

Currently, unorganized shooting occurs throughout the County including hunting activities and target shooting at private and non-sanctioned ranges on public and private land. In particular, former gravel pits are often used for this purpose. Hunting activities are pursued throughout the County, generally with the exception of designated no-shoot zones and developed areas. 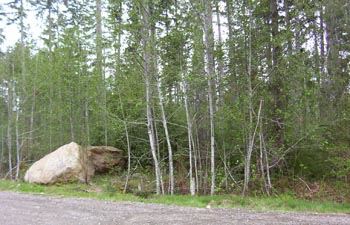 Throughout the last several decades, the County has proposed numerous alternative sites for a shooting range, culminating in the mid-1990s with a proposed site off of Blue Mountain Road, between Port Angeles and Sequim. More recently, several sites have been proposed in the area west of Joyce. The major advantages of these sites are the low residential density in the area and increased safety of some sites through the use of natural topography which acts as a secondary backdrop to the target ranges.

The proposed Sadie Creek site is part of State Trust Land that is currently managed for timber harvest and recreational needs by the Department of Natural Resources (DNR). The County is in the process of having the land reconveyed back to the County for use as an organized shooting range. The process has included several public meetings with the Clallam County Parks and Recreation Advisory Board, the DNR, and many other shooting organizations. These web pages will outline the information the County has in regards to the proposed plan. This site will by no means have all the information but its intent is to offer readers a factual account of the proposal. As the reconveyance process moves forward, new information will be placed on these web pages as it becomes available.

Clallam County is in great need of a safe, organized, and accessible site for the discharge of firearms. Users include law enforcement, local recreational shooters, military personnel, youth groups, hunting clubs, tourists, and a host of others.

How will the alleged environmental concerns of unsuitability for the proposed site be addressed?

The State Environmental Policy Act (SEPA), Conditional Use Permit (CUP), Environmental Impact Statement (EIS) and Critical Area Code (CAC) Certificate of Compliance permitting processes will address the concerns. (See the Permitting section for more information on these permitting processes.) The project must pass these environmental safeguard steps before any development may begin. For example, Best Management Practices (BMPs) must be detailed and show how the lead will be contained then removed from the site, before permits are issued, certainly before any construction begins. Public hearings will be held for these permits.

How was the rainfall measurement obtained for the area?

The National Oceanic and Atmospheric Administration (NOAA) website was used as a reference. The annual rainfall data was accumulated from NOAA weather stations (1961 - 1990) and configured in 2 × 2-kilometer latitudes and longitude. The information can be reviewed by visiting the Western Regional Climate Center.

Is the project financially viable?

The Pacific Northwest Shooting Park Association (PNSPA) will provide the funding for the permitting, construction, maintenance, and required monitoring of the proposed range. This information is outlined in the PNSPA's business plan. View the PNSPA Fund Raising Proposal (PDF).

A small portion of roadway, which is used as part of an off-road vehicle (ORV) recreational trail may be re-routed to assure safety, but it will not be removed. The Department of Natural Resources (DNR) is currently working on this issue with the local ORV user group. During initial meetings with the DNR, the proponents of the proposed shooting range discussed options for mitigating any ORV trail sections that could possibly be affected by any future proposed range. The proponents agreed to build a short section of trail that would bypass the actual DNR road that is used by the ORV trail system now, so there would be no net loss of trail mileage in this area. In fact, they also agreed to only close the short section of road going by the proposed range site during shooting hours and this section will still remain open for ORV use at other times. Also, range operators have agreed to close the range during the 1 or 2 ORV events/rallies that are held each year in this area. That will ensure this very important annual activity may continue.

Will there be enough people using the range to make it a worthwhile endeavor?

The PNSPA has provided an estimate based on known firearm ownership indicating a potential population large enough to support a shooting range. The law enforcement and military communities are in need of this type of facility as well.

The numbers supplied by the PNSPA are as follows:

There is no doubt that some cross-over occurs in the groups, but these numbers clearly indicate a large number of shooting enthusiasts live within Clallam County and neighboring Jefferson County.

How is the County involved in this project?

Is the proposal consistent with the Washington State Comprehensive Outdoor Recreation Plan?

Yes. However it is not the County's decision to make. That responsibility falls to the DNR. Locating a public shooting range is listed in the Clallam County Parks Master Plan, which is approved by both the Parks Board and the Board of Clallam County Commissioners, and is consistent with our plan. Our plan is on file with the State Recreation and Conservation Office (RCO) and qualifies us for State and Federal grants, including the FARR grant (Firearms and Archery Range Recreation), which is managed by RCO.

There are two service tools used to measure the effectiveness of the State's investment in outdoor recreation. Each of these service tools has a set of three guidelines to measure the success. The baseline for the State is resource protection, but this reconveyance is for the County, a local agency. The service tool aimed at local agencies reads: "Local agencies are encouraged to emphasize individual active participation, balanced with facility capacity, service area, facility condition, and public satisfaction."

What conditions, if any, should the DNR place on the reconveyance to coordinate management, including public use of adjacent trust lands?

There are four areas the County has discussed with DNR staff regarding continued management and access to the area:

In a flyer posted at the Sadie Creek ORV Trailhead, it stated there will be a ricochet danger from the shooting range. Is this true?

The map and diagram were based on information using a .50 caliber firearm. A weapon of this size will never be allowed at the proposed shooting range. For firearms allowed at the site, there will be several barriers to prevent possible ricochet threats, including: man-made berms, natural topography, and distance buffers. Other misleading claims of trail closings and lack of area shooters have been addressed above. View the Ricochet Danger Flyer (PDF). View the Letter on Ricochet Distance (PDF) and Map Explaining the Danger of a Possible Ricochet (JPG) from a .50 caliber weapon and shooting from a vessel towards the shoreline.

Recently, at the Salt Creek Recreation Area, lead and other compounds were removed from the old military shooting range proving the proposed shooting range is a bad idea. What is your response?

The former Salt Creek shooting range and the current Sadie Creek proposal have significant differences both in terms of regulatory requirements and monitoring/clean-up.

In 1942 and 1943, the United States (US) government obtained through purchase, lease, donation, and condemnation, land necessary to build the coastal artillery battery, Camp Hayden Military Reservation. The completed Camp Hayden included four batteries, a gun installation, barracks, and other buildings. In 1949, the facility was transferred to the U.S. Coast Guard, which continued to use a portion of the property as a small arms firing range until 1957.

In 1959 the County purchased the site from the U.S. government where the Sportsman's Association, a loose collection of civilians, informally used the firing range until the County closed the range in 1968 to expand the park for public use.

During this time, there were no permitting requirements, no regulatory requirements, no programs for monitoring, reclamation or clean-up. Once the area was no longer used as shooting range it was simply left as it was.

By contrast, the proposed Sadie Creek site will need to be precisely designed based on current safety, engineering and environmental standards and requirements. Best Management Practices (BMPs), as recommended by the Environmental Protection Agency (EPA), will be used to reduce lead toxicity and other potential environmental impacts and must be approved prior to any construction.

Compliance with Federal and State laws pertaining to toxic materials such as the Resource Conservation and Recovery Act (RCRA); the Comprehensive Environmental Response Compensation and Liability Act (CERCLA) and the Model Toxics Act (MTA) will all likely need to be satisfied prior to construction.

The detailed regulatory process to obtain permits will begin with the re-conveyance of the site to the County by the Department of Natural Resources (DNR). This process will be followed by the State Environmental Policy Act (SEPA) review (which will likely require an Environmental Impact Statement (EIS)), and issue of local, state and federal permits which are required (see "Permitting" page/tab for the list of other probable required permits)